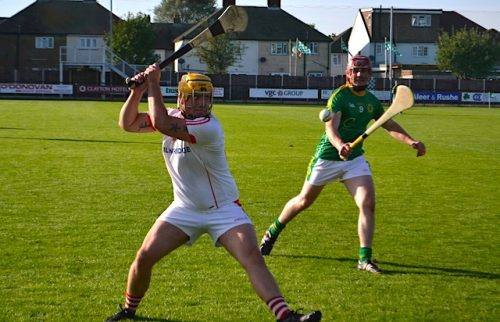 Fionn Byrne struck with the last puck of the game to win a seven-goal thriller and keep Cuchulainns alive and kicking in this year’s championship.

For all of the criticism of the new hurling structure, this was knock-out hurling at its very best. A better game of hurling in London this year, we may not see.

A game which ebbed one way and then the other, only for Byrne to snatch victory from the Pearse’s grasp with a ferocious injury-time free which somehow found a way through the steadfast green jerseys on the Pearse’s goal-line, and into the net.

There was no time for Pearse’s ‘keeper Shane Kelly to puck-out. That’s how late Byrne struck.

While Cuchulainns now advance to a ‘shoot-out’ with Sean Treacys for a place in the ‘Round Robin’, Brothers Pearse’s interest in this year’s championship is over. They can at least console themselves with the fact that there is no relegation.

It had looked like Pearse’s might stroll to a comfortable victory in the opening quarter. Conor Kennedy rattled the Cuchulainns crossbar in the fifth minute, but Stephen Page found the net moments later, set up by the excellent Tony Clarke.

Pearse’s led 1-2 to no score after nine minutes with Byrne struggling to find the target, and Clarke’s goal-bound shot was blocked by Tom Brennan.

But as Kilburn Gaels will vouch, Cuchulainns are nothing if not full of heart and character, and they duly began to fight back. If they do advance to the ‘Round Robin’ none of the ‘big three’ will get an easy ride against them.

Cuchulainns were now moving well and had clawed their way back to within a point, when they got the goal they deserved.

Kelly fumbled Oisin Gately’s ball in. The Pearse’s keeper regathered, but Karl Rogers nipped in to flick it the ball home off Kelly’s hurley.

Cuchulainns led 1-6 to 1-4, but only for three minutes as Clarke worked a miracle, boxed in on the sideline, to find Mike Noonan and he shifted it on to Andrew Robinson in space to goal.

A late Cathal Noonan strike ensured it was honours even at the break; Brothers Pearse 2-4, Cuchulainns 1-7.

Cuchulainns had edged into a one-point lead by the 40th minute when Rogers claimed his second goal, finishing well to the net ‘soccer style’. They stretched that margin to five points.

This was now a test of Pearse’s character, and they responded with a goal from Clarke. Good pressure forced a rare error at the back by Cuchulainns, and the ball was worked to Clarke, who cut inside before beating Damian Maloney.

This Round 2 tie was beginning to take on epic proportions.

The sapping heat was also starting to extract its toll, and it was Cuchulainns who were looking the stronger. But Clarke’s goal had brought Pearse’s back to within touching distance, and with seven minutes to go they were level.

Clarke was again the scorer as he applied the finishing touch to Kevin Reid’s inviting ball in.

Pearse’s were the ones showing the composure. Kennedy pointed twice either side of Byrne and Adian Power both missing the target.

Rogers made it a one-point game, and then the moment Pearse’s will rue. Kennedy’s shot cannoning off the Cuchulainns’ crossbar and over for a point. Kennedy reeled away with his hands on his head. An inch or two lower, and it was all over.

That gave Cuchulainns one last chance, and they took it. Cometh the hour, cometh the man, as Byrne picked himself up off the Ruislip turf after being fouled to drill the ball home for the winning goal.